I was invited down to Salisbury plain by Matt Prior on the 14th September for some survey work and mist netting. So after work on Tuesday I drove down and cracked on straight away with surveying Skylark on the farmland. Using a technique I've only used once before - but Matt is very good at it! We trapped and ringed 10 Skylark, Corn Bunting and a Meadow Pipit which was a very good return. After only having a few hours of sleep in the back of my car I went out with some of Matt's ringing team. 123 birds were ringed and 1 control. Highlights were Whinchat, 2 Stonechat, 3 Grasshopper Warbler and good numbers of Meadow Pipit. The landscape is just amazing as is the habitat. I really enjoyed myself and learned a lot - thanks Matt....... 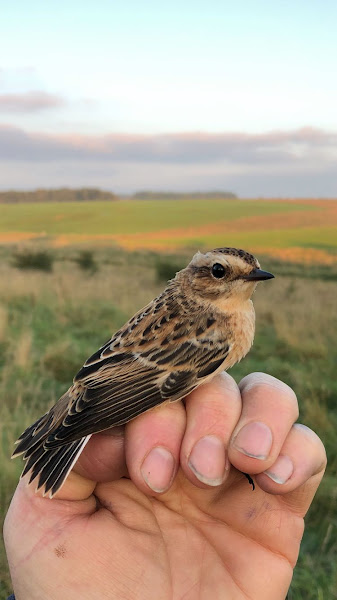 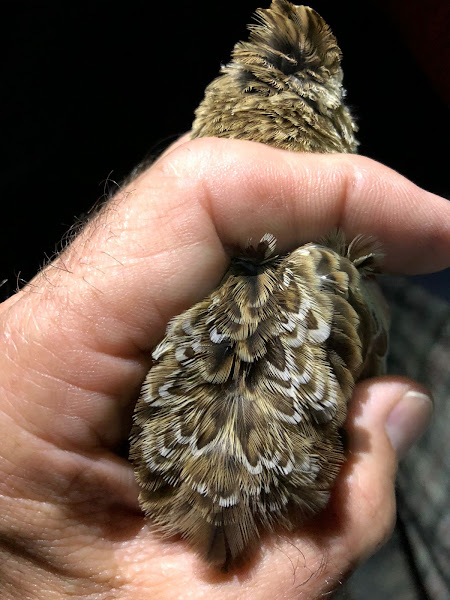 Skylark 3j
Posted by Shaun harvey at 12:09 No comments:

This Common Redstart (code 3 male) was trapped and ringed at our little site on 21st August with PH. It's our first for the site. 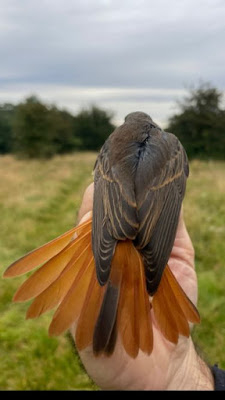 Numbers are down from last year probably due to a late spring? but we'll have to see and look at the total figures at the end of the autumn. What's also interesting is the large amount of fault bars we're seeing in young birds due to that wet weather we had earlier in the spring. So, with our time split between two sites Walthamstow Wetlands and ours over the past few months the former has come to a end as we've finshed the CES. It's been fun and some good solid data has been collected. On 29th our final CES 12, we had this Juv Grasshopper Warbler and again this was a first of the site to be ringed. 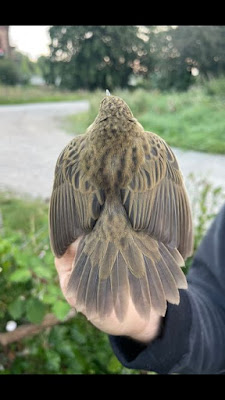 Also while we were processing birds at the ringing table we had 3 Great white Egret fly north.
Posted by Shaun harvey at 13:02 1 comment:

Looking out from the conservatory window this morning at my mist net half way down the garden I saw the first bird of the session drop into the top panel. Wow! I did't expect to find a immature male Pied Flycatcher in there. A superb bird for any garden or ringing site in greater London but my garden - well chuffed. 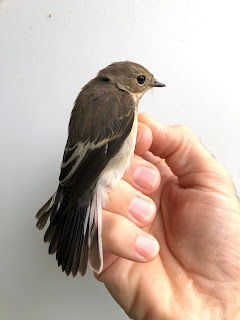 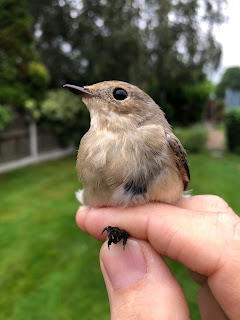 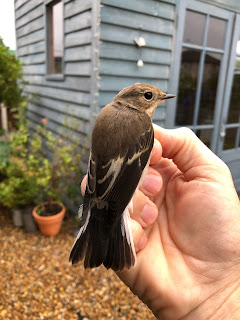 The session finished as it normally does for the garden Robin, Great Tit, 3 LTT and a handfull of Blue Tits.
Posted by Shaun harvey at 11:53 No comments:

Went over to Rainham Marshes last Saturday afternoon and missed the Great white Egret and the White Stork but did see the Spoonbill asleep from the Serin mound. But late Sunday evening the White Stork showed really well from road near the tip entrance. 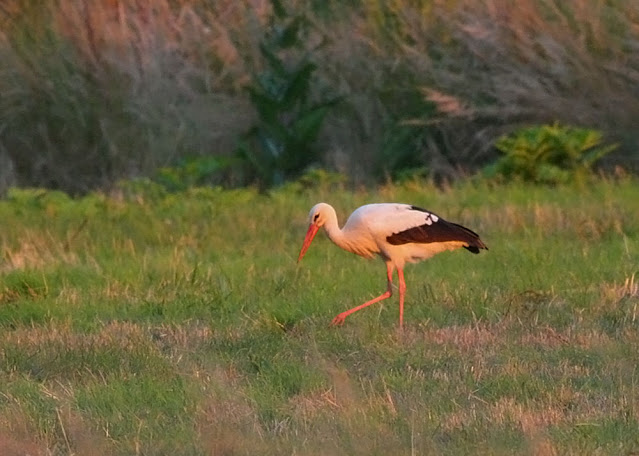 On Wednesday with the NTGG we made our second visit of the season out to the tern rafts by boat. With 50 Black-headed Gull pulli ringed on our first visit it was good to add another 21 along with 9 Common Tern pulli which were all ringed and coloured ring as part of the ongoing project. 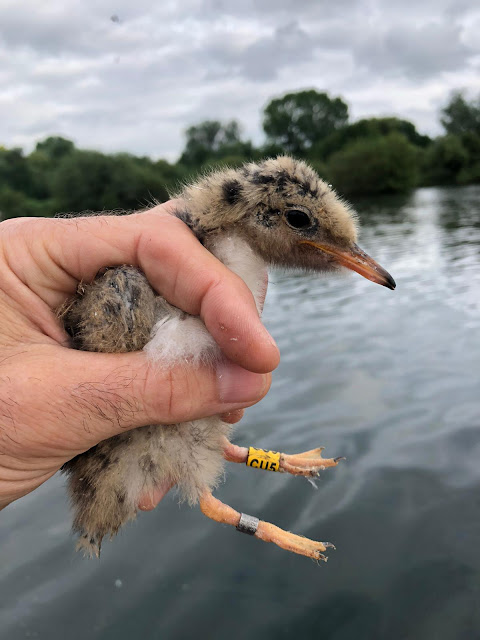 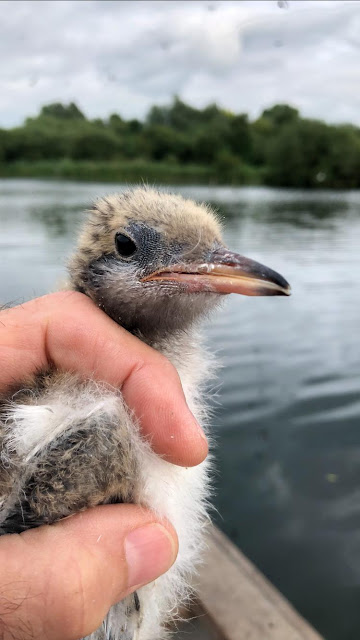 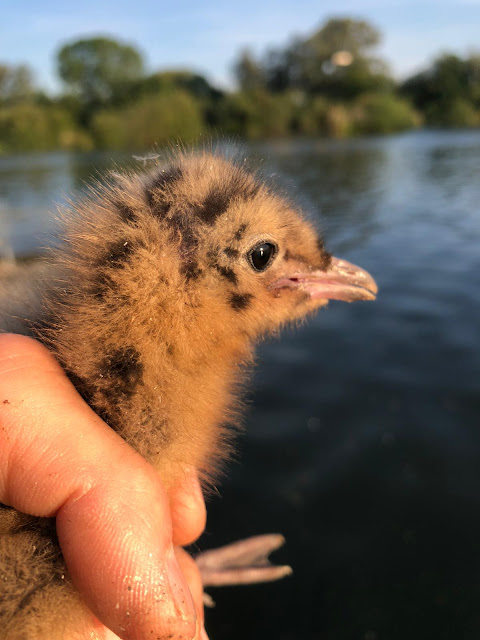 Posted by Shaun harvey at 09:33 No comments:

Rolling back the years

Yesterday afternoon I went to Icklingham in Suffolk to see the popular European Roller which showed really well, actually stunningly well. I haven't twitched for a while now but with my wife and daughter with me it was like we were rolling back the years when they would be happy to come out for a day. Ok, I did treat them to a lovely lunch in the near by pub the Guinness Arms- which is really nice if you're out that way. 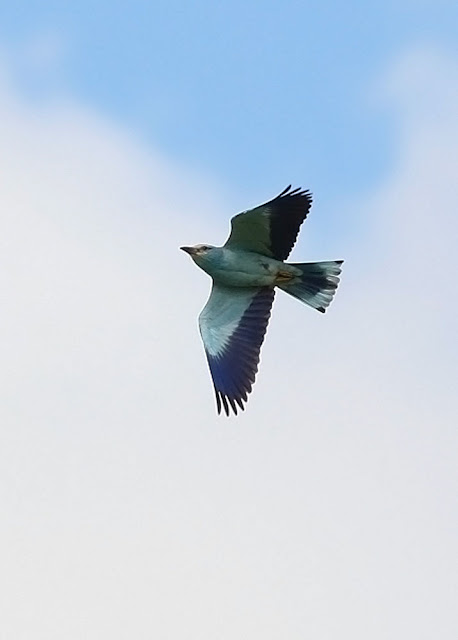 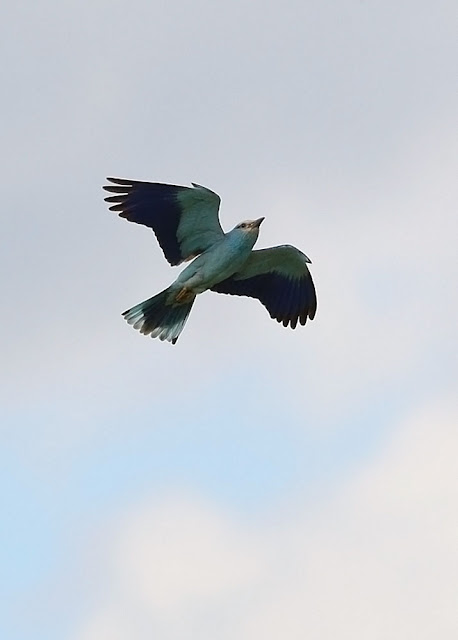 With most of my time I'm out ringing it was nice to dust off the scope and camera!

Posted by Shaun harvey at 01:04 No comments:

Last week I went out with a small team from the Southern colour ringing group to check on the Herons at Netherhall. With 25 active nests and 8 birds ringed and colour ringed and some early Little Egrets nest counted, it was a very productive morning out. 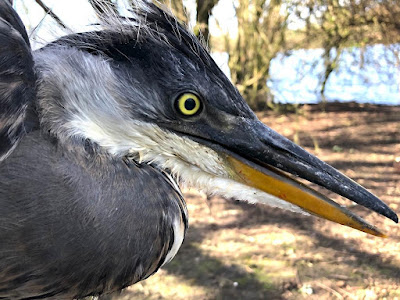 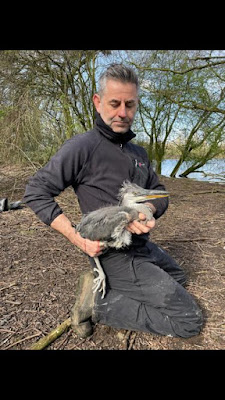 All images are taken with the iPhone

Posted by Shaun harvey at 11:29 No comments: