Saturday morning I went along to Walthamstow to try for the Little Bunting thats been hanging around for just  over a week. From 9.33am to 2pm I stood near it's favourite bush behind the yellow and black tape with twelve others plus checking the other bushes without sadly any sign . It's  the second London Little Bunting I've dipped, the first being the Amwell bird a few years back. Although having seen a good handfull of LB's over years it seems a tricky one me in London. The upside to the day was seeing the Greater Scaup and a pair of Goldeneye on Reservoir No 4 plus this Female Peregrine below that flew over the  LB's favourite bush in the wind and rain.

Sunday morning a quick visit to the patch and I added Peregrine which puts me on 74 for the patch year list. 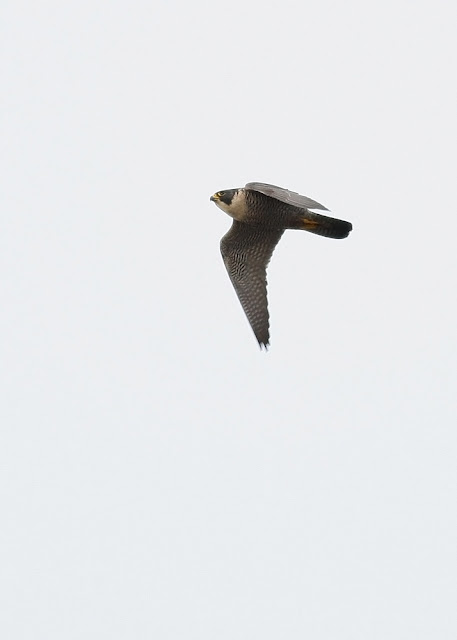 Posted by Shaun harvey at 10:43 No comments:

Spent Saturday and Sunday morning on the patch adding Greenfinch and Kinfisher for the patch year list which now stands at a respectable 73. Woodcock should be next but nothing is guaranteed at the valley and I should know as I've been doing it for 23 years. Despite the poor return it was still good to see a couple Brambling on both days in with the large finch flock feeding on the set a side, Reed Buntings, Yellow Hammers, Redpolls are also here ,so hopefully something good can be found amongst them? Walthamstow NR scored with a smart Little Bunting last weekend- can't see why we can't at the valley, so just have to keep looking......
Posted by Shaun harvey at 13:00 No comments:

Added  a couple of patch year ticks Friday evening with Snipe and on Saturday morning Red-legged Partridge and Bullfinch for a healthy score of 71.

Sunday morning I fancied a change of scenery and choose Thorndon CP for the Hawfinches. Once again they gave good views with up to 25+ being seen in 3 hours. Most views are fly overs as they zip from tree to tree giving the a tzik like call. The dull/grey light conditions is not ideal for photography so below are some poor images with very high ISO. 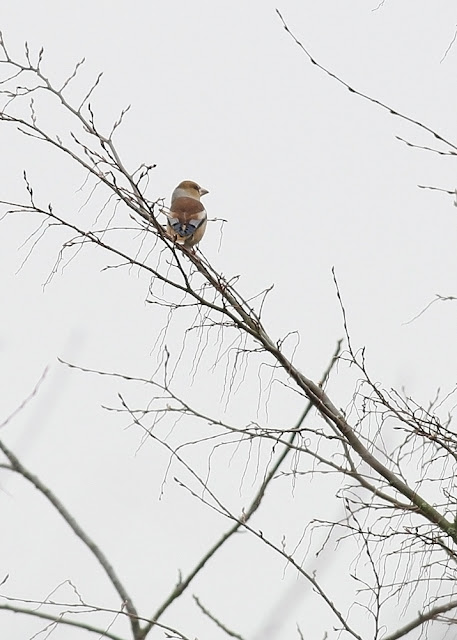 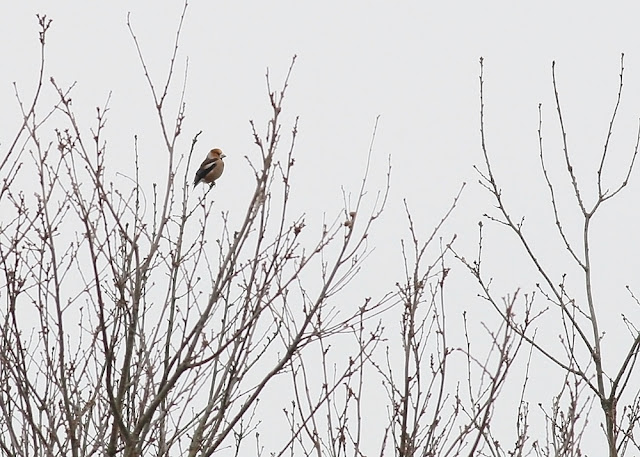 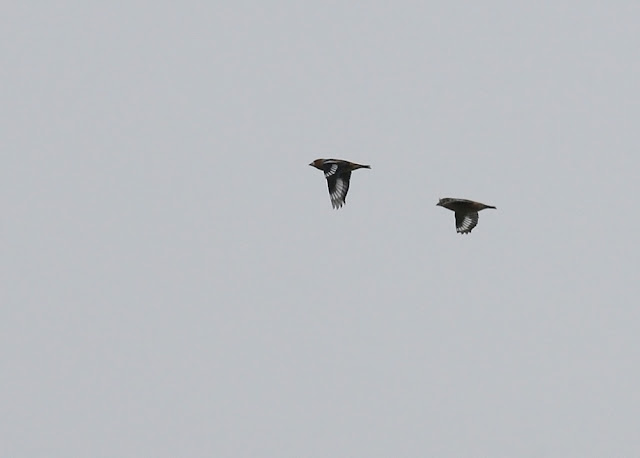 If I can add a view like this above on the patch this year I would be more than chuffed....
Posted by Shaun harvey at 09:06 No comments:

Out with the old

Out with the old  in with new so they say! Last year I topped out a score of 106 for Ingrebourne Valley- not bad, but on 65 so far this year. With today being the best day on the patch for months since the Osprey and Spotted Crake seen in the same day. Started off with 2 Brambling on the set a side crop then added a Male Marsh Harrier over Berwick ponds- didn't see one here last year.  After adding the norm I went home happy, only to be back out on the patch in mins as Paulboy Hawkins found  2 adult Berwick Swans on the reservoir a patch tick and a super find from Paul, then patch year ticked 7 Gypo Geese- didn't see one either last year. With Dave Mo and Lee and a few of the other locals adding the Bewick's it's been really goood day on the patch......

Some record shots below 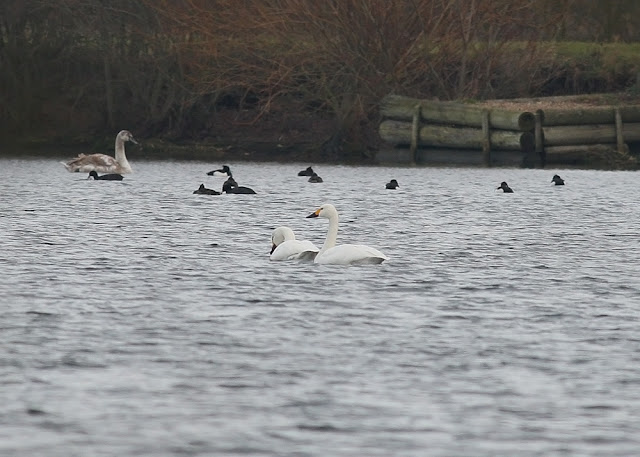 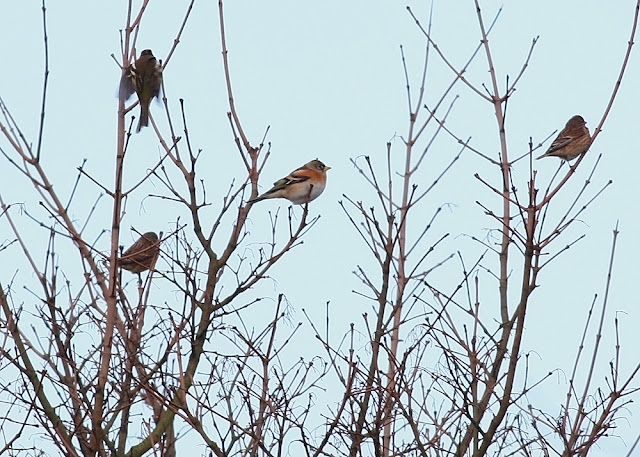 Brambling
Posted by Shaun harvey at 09:29 No comments:

With the 3W Caspian Gull giving birders good views on Eagle Pond, Snaresbrook I thought I would join in too. Smart bird....... 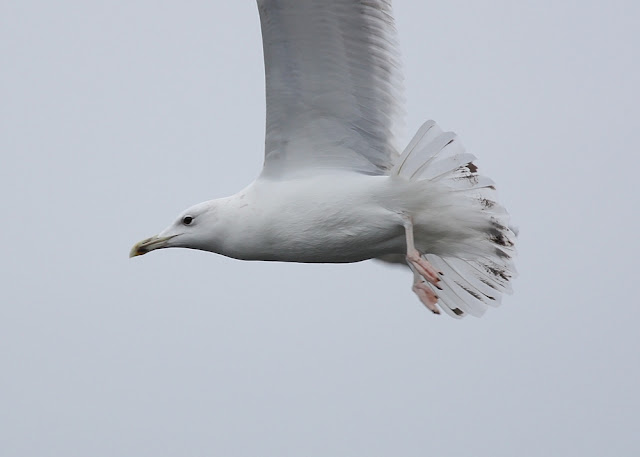 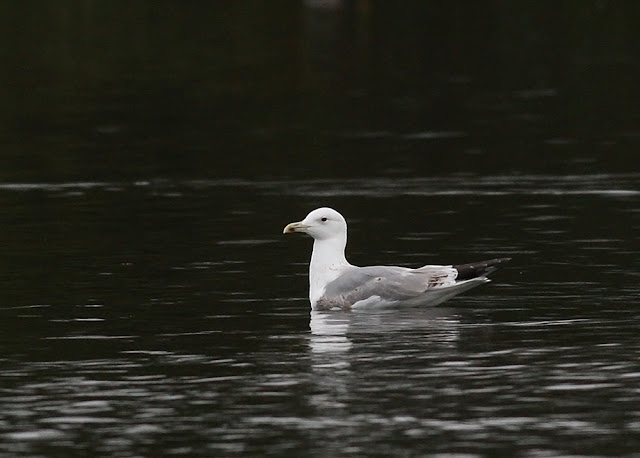 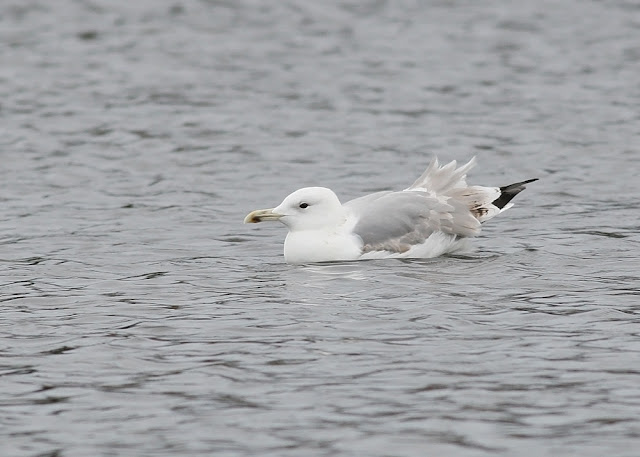 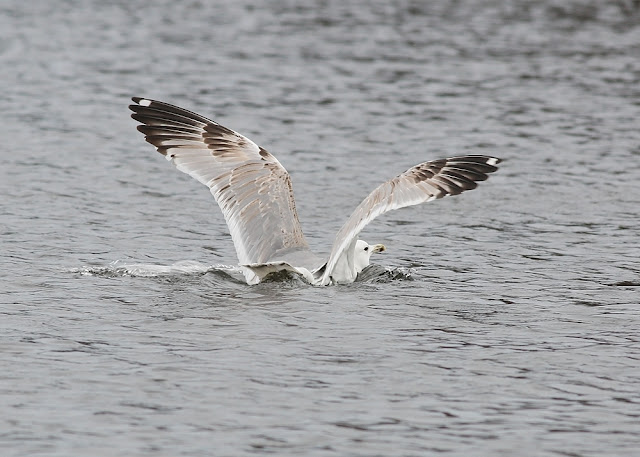 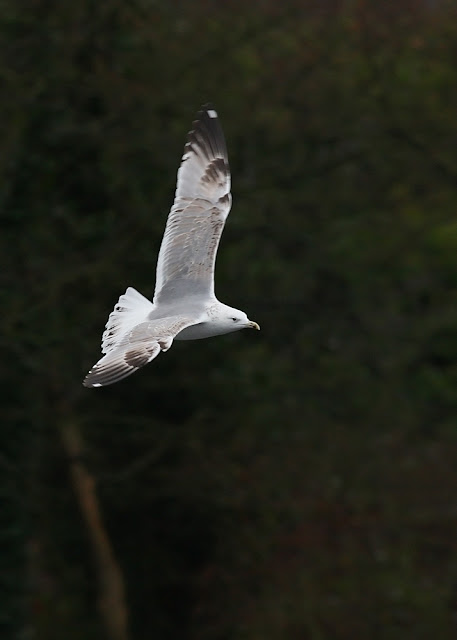 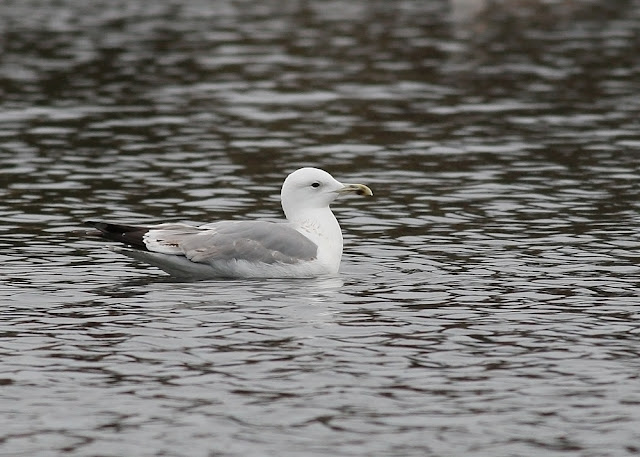 Despite the overcast conditions and light rain New Year's eve morning was far from dull and damp. First on the cards was to see the 3rd Winter Caspian Gull on Eagle pond off Snaresbrook road, which showed rather nicely from the concrete path, really smart bird- I will show some  images in the week of this brute.

So, next up was to go to Fairlop Waters on the way home to try and see the 2 Great White Egret which also showed very well. A short walk from the car and a scan of lake revealed one of the Egrets feeding, as I got closer to the lake a pair of Egyptian Geese noticed me and started giving a alarm call and flew off as did one of the Egrets-bugger! So without wanting to disturb anything else on the lake I tucked myself out of the way and waited for only about five/ten minutes not long before both Great-White Egrets returned and carried on feeding on the opposite bank. 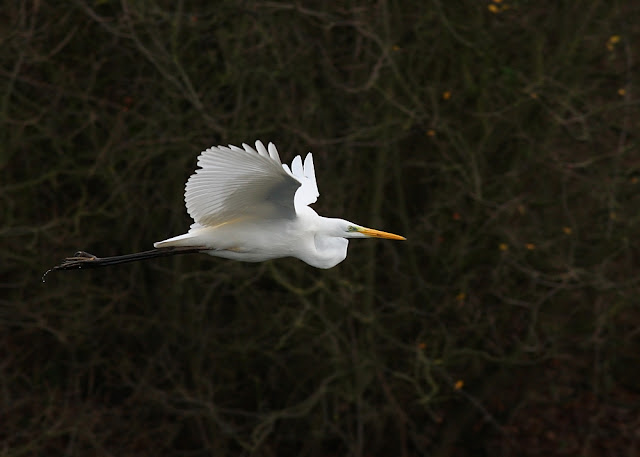 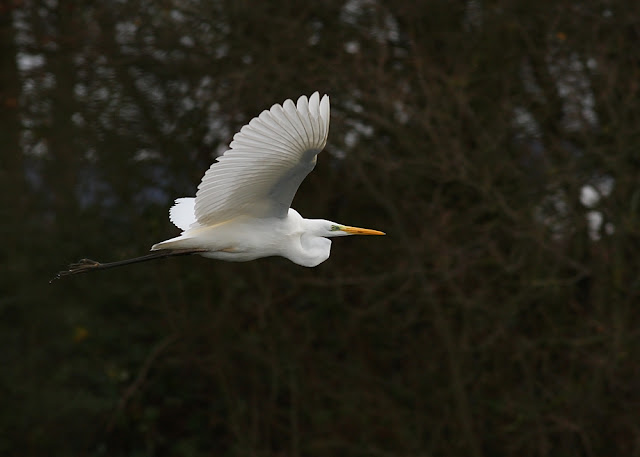 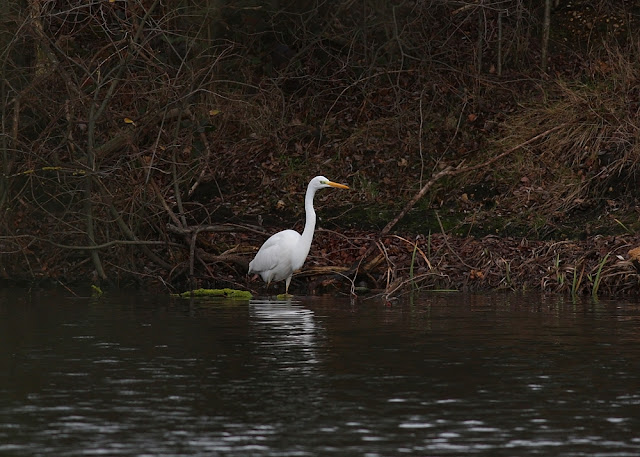 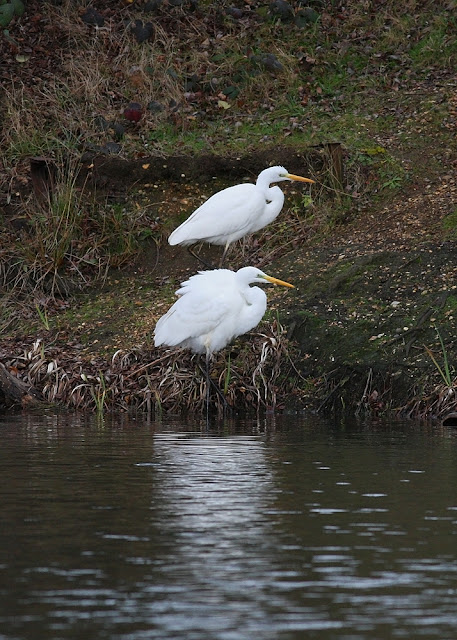 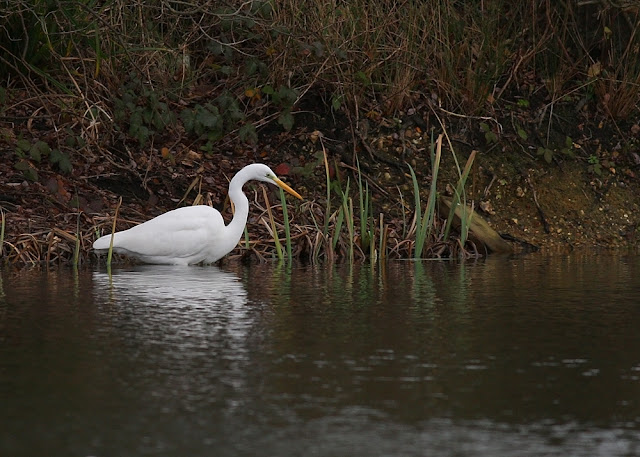 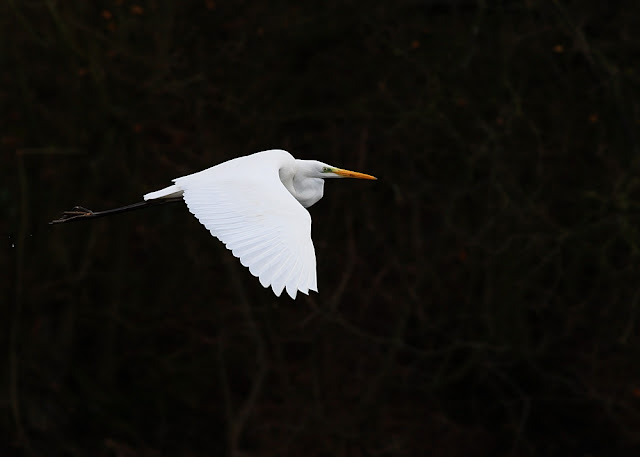 Posted by Shaun harvey at 07:08 No comments: